History of the inn “de Campveerse Toren” since 1440

In this old fortified town, ideally situated on the Veerse Meer, you will find “Auberge de Campveerse Toren”. The name of this centuries-old municipal inn is a reminder of the original name of the town, which used to be called Campveere :

Veere is named after a “Ferry” and ferry-house that was constructed by Wolfert I van Borsele after he reclaimed the lands with dikes in and around Veere in 1280; this ferry allowed crossings of the Veerse Gat to connect what was then the island of Walcheren with “de Campen” on North-Beveland; this village whose name derives from Campum (a Roman camp where legions sailed to Great Britian) was on the island of North-Beveland at the other side of the former bay, which is now the Veerse meer. The reclaimed land of Veere received municipal rights issued as a Charter from Count Floris V of Holland on All-Saints day, November 12, 1282; the “Campveerse Toren” was subsequently built between 1358 and 1390 when Veere was erecting its walls. The tower was part of the fortifications, just like the other towers and gates, which were strategically erected in positions around the town. Wolferd IV van Borsele, Lord of Veere, who resided in the near-by castle of Sandenburg, was the instigator of these works and made the fortifications part of a larger project to improve the streets and replace its wooden houses with stone structures to diminish the danger of fires. The lords of Veere saw to it that Veere became a prosperous commercial centre by transferring the Scottish wool staple to Veere. Because of Veere’s monopoly on the import of Scottish wool for the whole of Euorpe, the town became one of the main ports of the Netherlands in the fifteenth and sixteenth centuries. The town is still rich in monuments from that time, like the Big Church, Town Hall, Cistern, and Scottish Houses.

The other side of Veere’s natural harbour also had a similar semi-circular tower. This was used as a storage place for gunpowder, and was therefore called the Kruittoren or Gunpowder Tower. On 26 February 1630, during a landside on an otherwise still night, this second tower vanished into the Veerse meer, which was then a bay of the North Sea. However, both towers still appear in the town’s coat of arms, which can still be seen on the north side of the Cistern. At the beginning of the sixteenth century, the Campveerse Toren was no longer used as a fortification (until occupation by Napoleon) and the then Lord of Veere transformed it into an inn. On December 23, 1553 the last Lord of Veere, Maximilian of Burgundy, decided to transfer ownership of the Tower to the town of Veere, on condition that the municipality was only allowed to lease it to very capable innkeepers.

In Veere’s occupation by Napoleon Bonaparte, the bricks from the last of the castle Sandenburg were used to create an outer wall, which can be seen in a large model of Veere at the Big Church. After this occupation, the wealth from the wool trade ended and the Tower found itself in increasing disrepair; in photos and paintings from this period, we sometimes see the Tower depicted without its beautiful high-pitched gable. This gable was further wwwlished in 1869 to make room for a roof terrace. During the Second Word War, the western wing of the tower was levelled by Nazi occupation for artillery clearance to the North Sea. Subsequently, the tower endured two floods, from dikes bombed in 1944 and a “perfect” storm in 1953. Then in 1959, the bay outside Veere was permanently closed by a land dike to protect from future floods; the once thriving bay still alive with fishing boats originating from Veere was by the enclosure transformed into the “Veerse Gat”, a lonely inactive remnant of its former days. However, sailors found this now protected lake ideal for yachting and the “meer” now provides the perfect setting for sailing regattas such as the Van Loone regatta of old flatboats as well as for countless families that find the Veerse meer the ideal location for their yachting holidays. For these travellers, the harbour of Veere and the Campeveerse Toren are still their welcoming haven.

From this origin and through the vicissitudes of history, the Campveerse Toren has remained an inn for over 500 years, making it one of the country’s oldest continuously operated inns. During restoration completed in 1951, the beautiful high-pitched gable was fully restored and the tower regained its original beauty.

Over the past centuries, a great number of dignitaries have climbed the stone steps that lead to the taproom. Among these are: the counts of Egmond and d’Hoorne (1563), all the governors in their capacity as marquis of Veere and Flushing, the Russian Czar Peter the Great in 1717, and Prince William of Orange on two occasions: Prince William organized his wedding feast here for his third bride, the French princess Charlotte de Bourbon. The Veere archives still contain the bill for this event. The shopping list mentions pheasant, peacock, suckling pig, ham, duck, lobster, bittern and a whole veal as well as a variety of vegetables, white and brown bread, pastries and cakes and many bottles of wine. A few years later, on 1 September 1583, the Prince also held his wedding feast here for his fourth bride, Louise de Coligny.

In the beginning of the last century many artists settled on the island of Walcheren. They found inspiration for their paintings in the enchanting Zeeland light, the picturesque view of Veere, and the continuous activity of the fishermen. Many of them spent their summer months in the Campveerse Toren; among them were: Henri Cassiers, Anton Pieck, Walter Vaes, Le Fauconnier, Charley Toorop and many others.

More recently, various members of the Dutch Royal Family have come here for a culinary treat. Also foreign royals knew the way to the Campveerse Toren; Prince Rainier of Monaco and his wife, Princess Gracia, better known as film star Grace Kelly, had a lunch here on June 30, 1958 during their holiday in the Netherlands.

Authors, have used their hotel rooms during their stay as temporary offices, including: Bertus Aafjes, Viruly, Necio and in the nineteenth century Charles de Coster (author of Tijl Uilenspiegel). Nowadays the Campveerse Toren is still the welcoming inn of the old days with its classic romantic atmosphere, but with present-day comforts and a gourmet menu! And, as we learn from the old “Cronicle of Zeeland” (1669), the Campveerse Toren aims:

“….to lodge and treat people of quality or other passing travellers…” 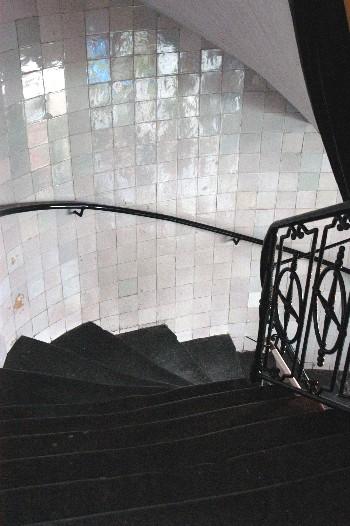 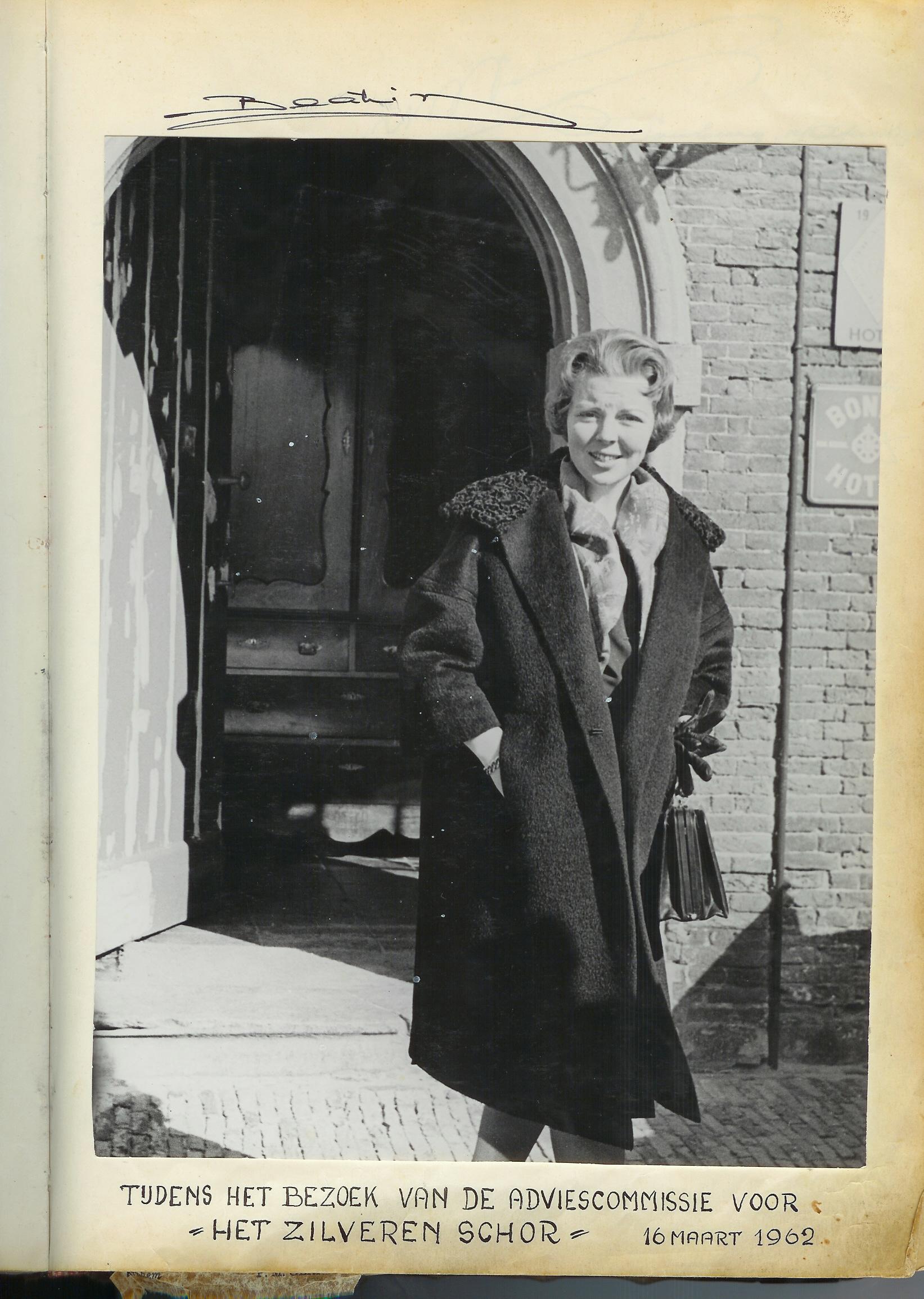 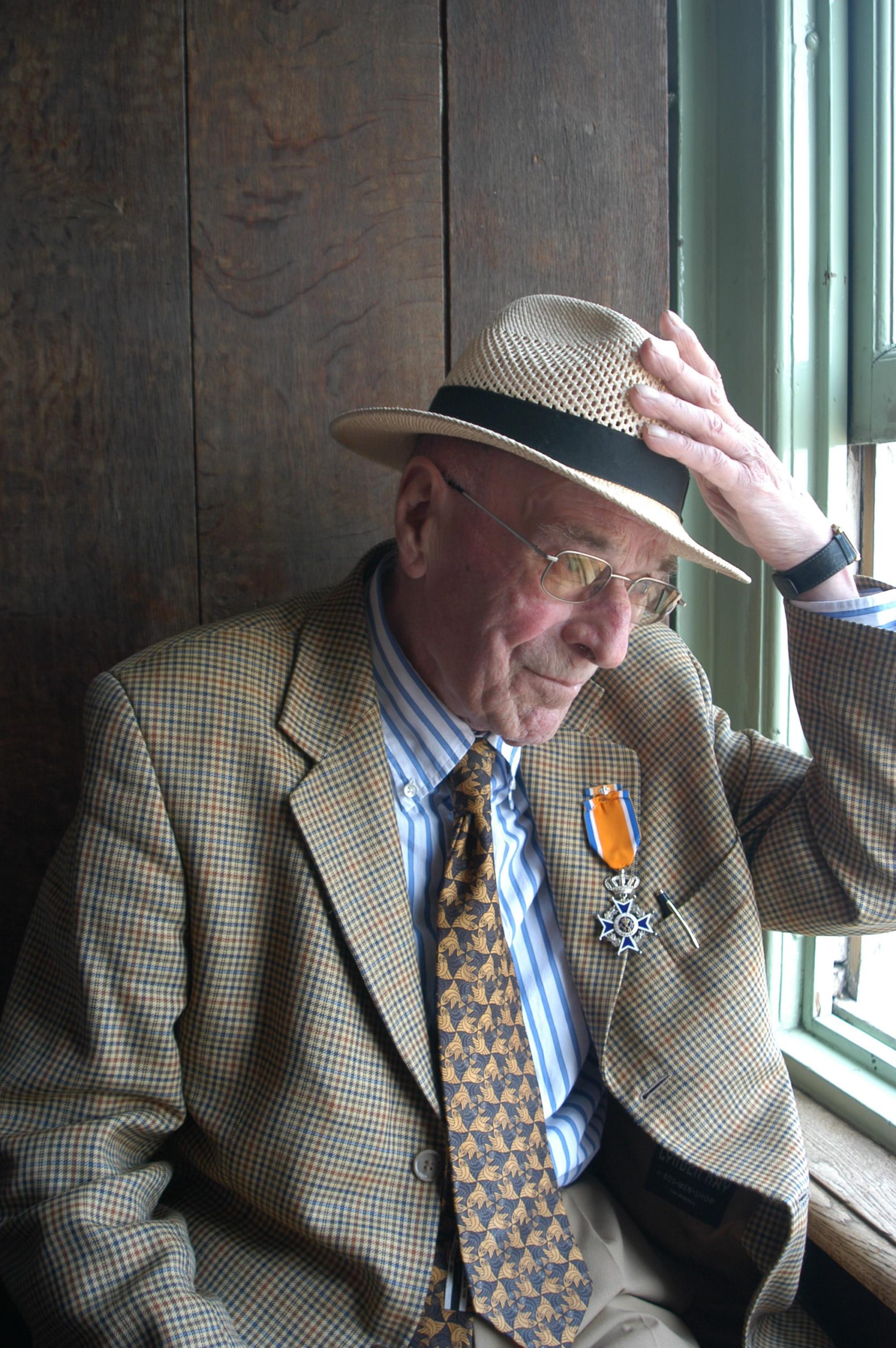 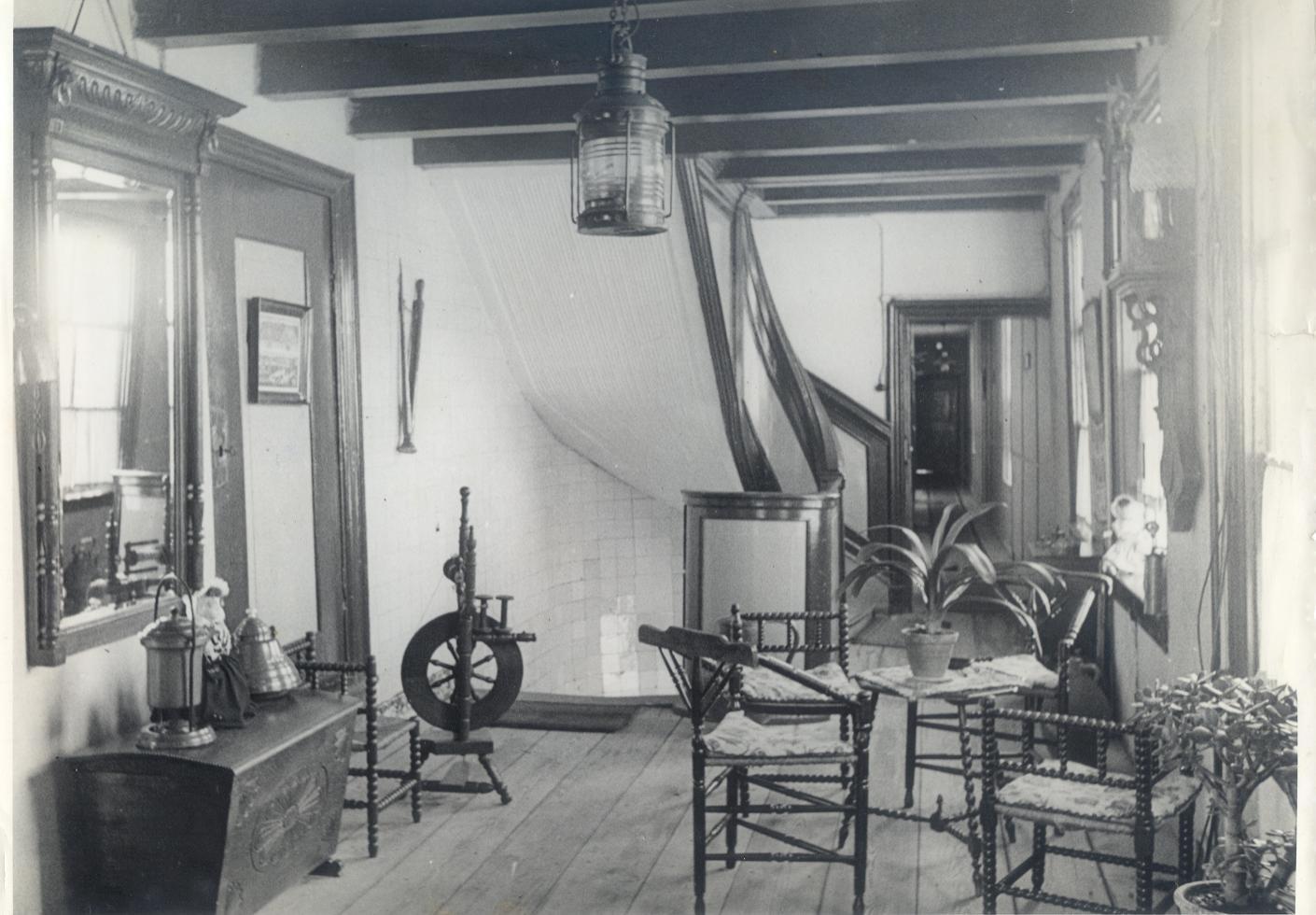 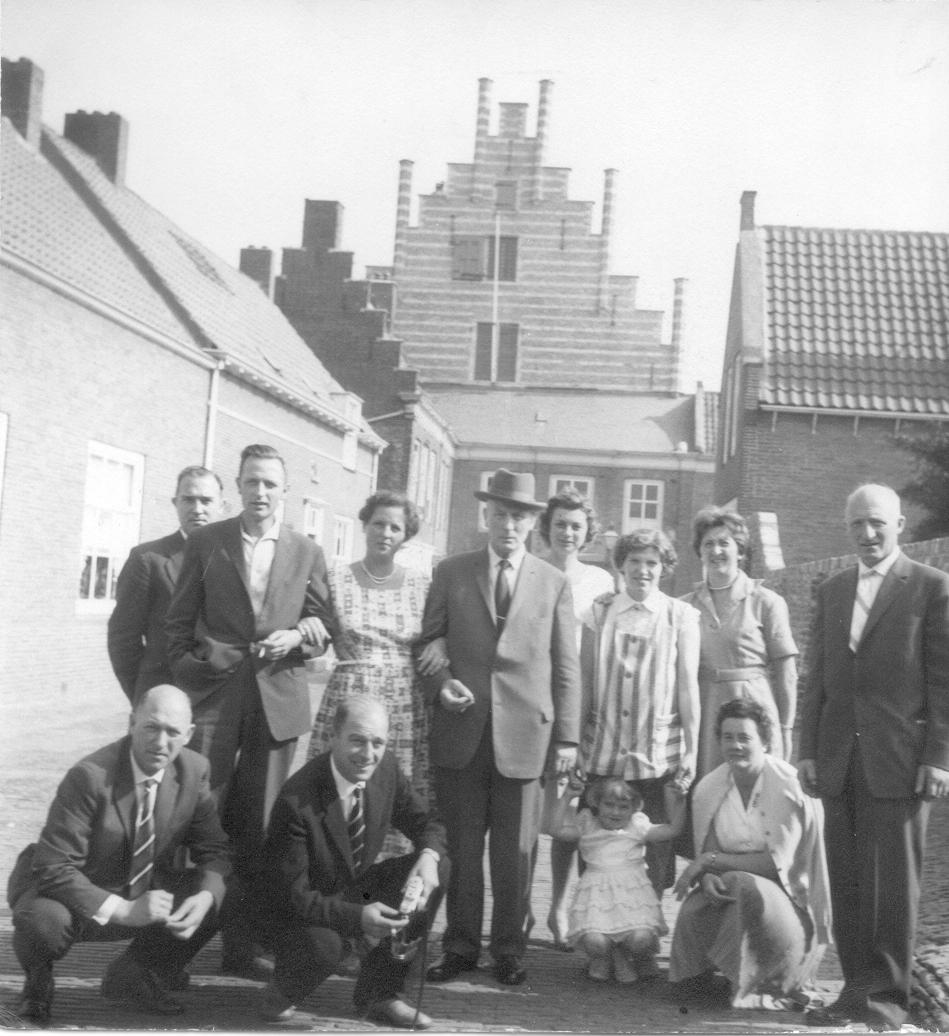 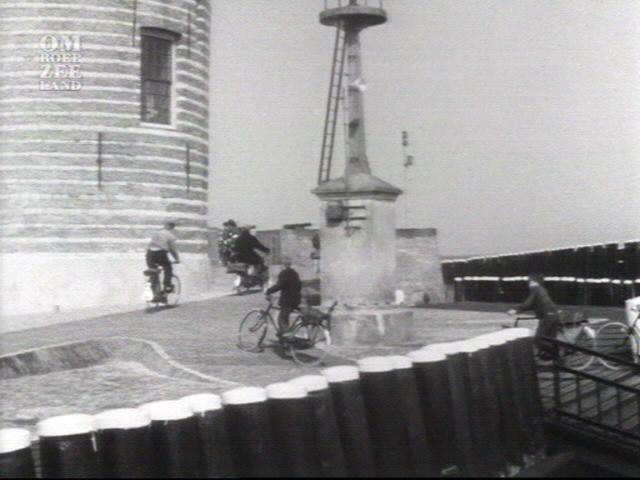 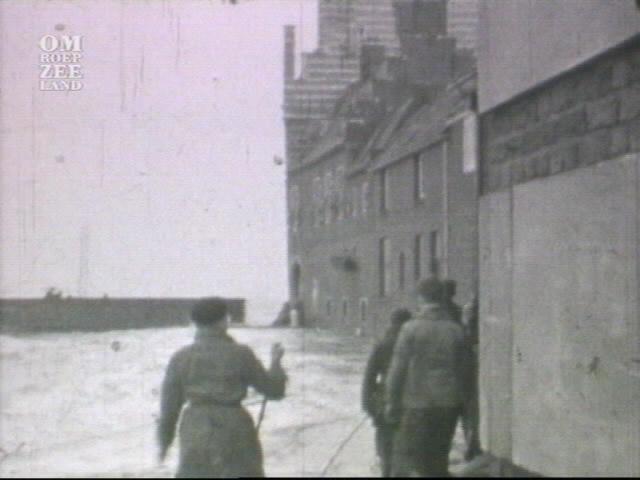 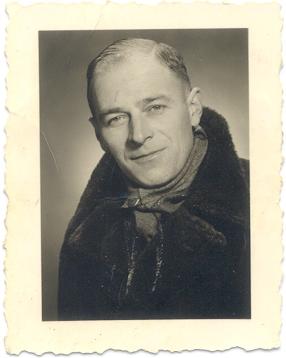 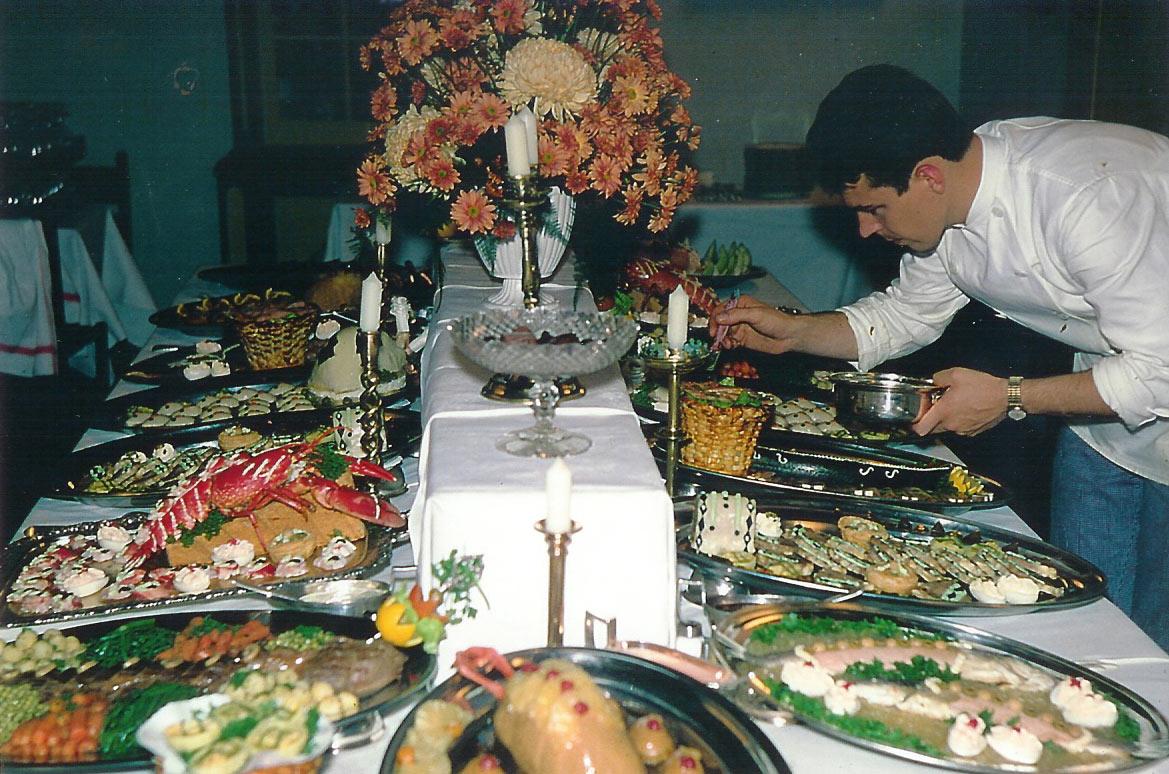 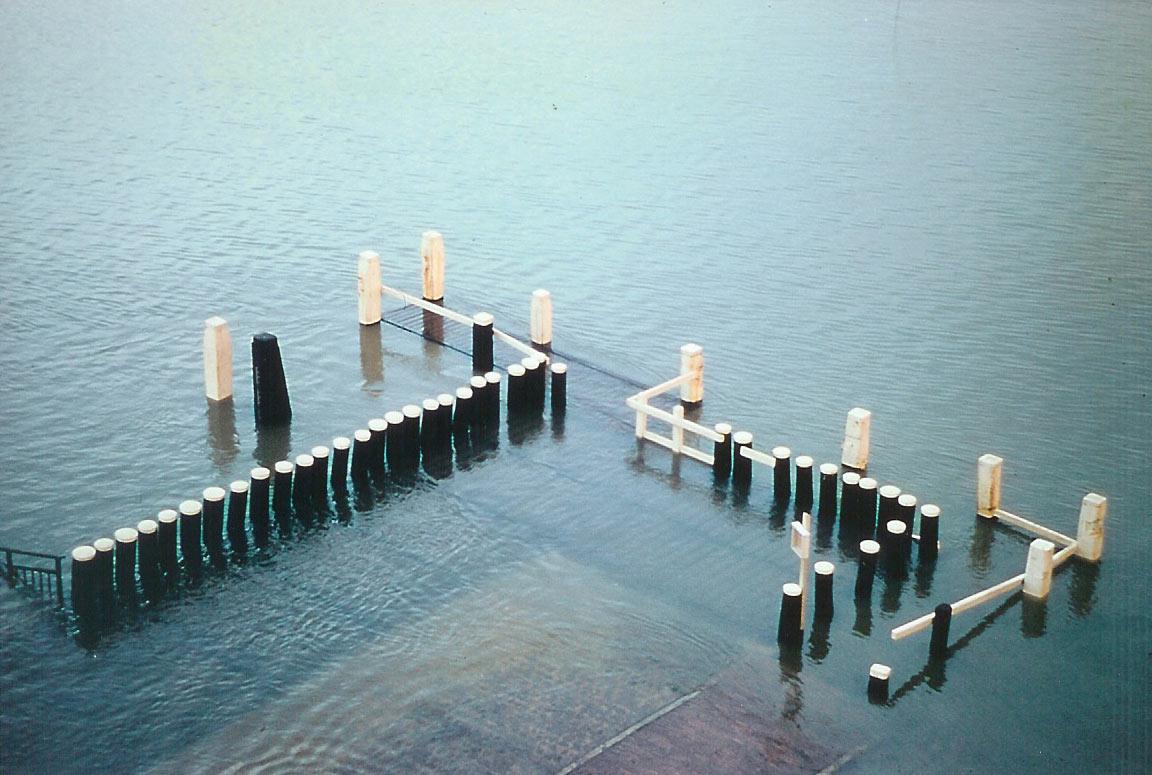 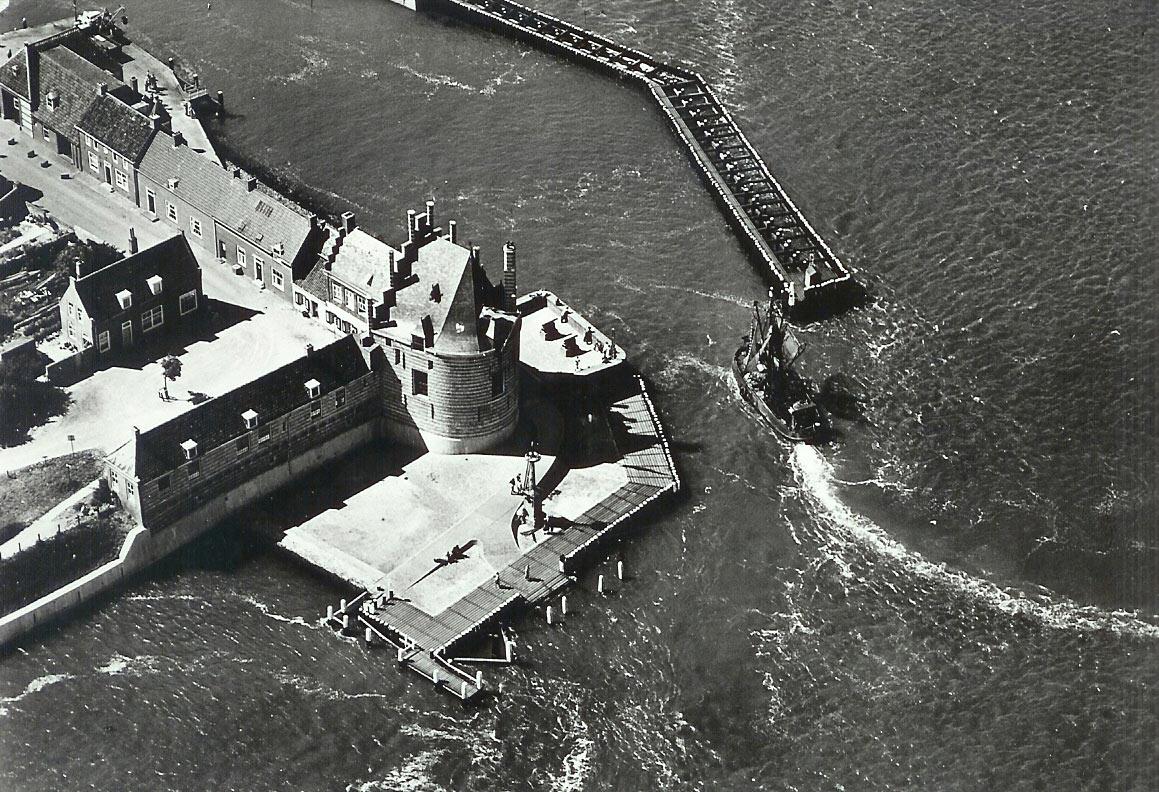 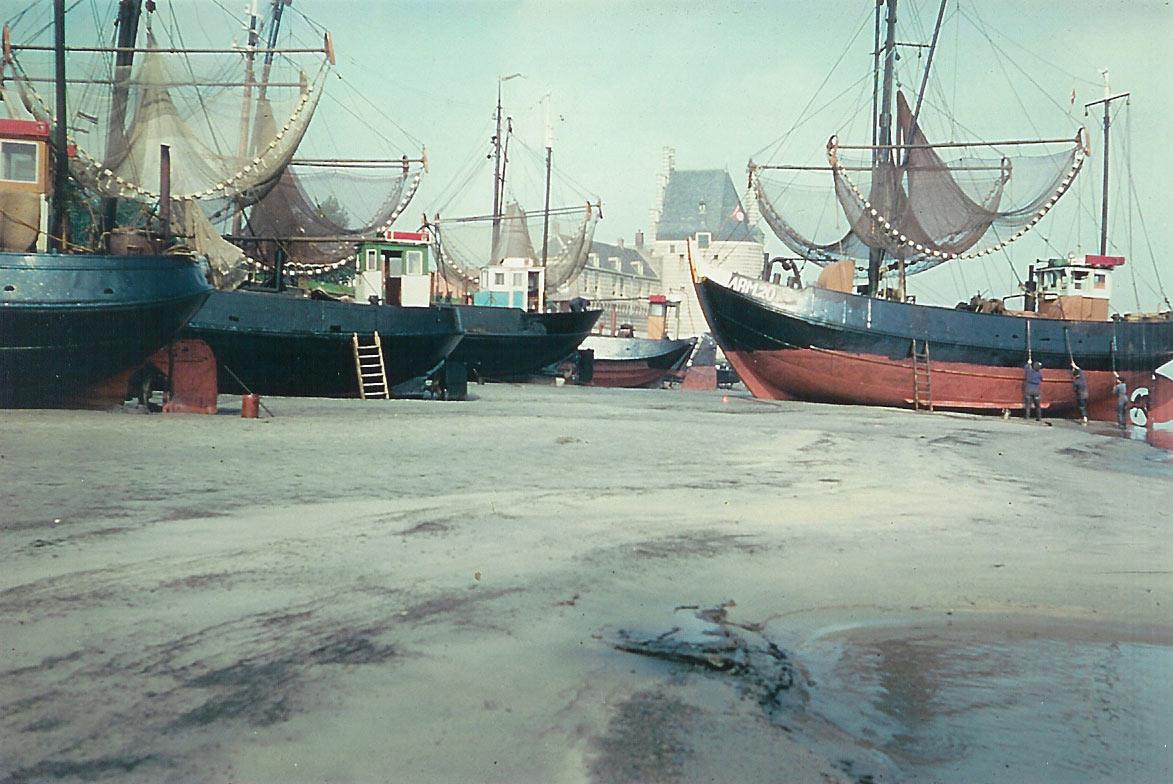 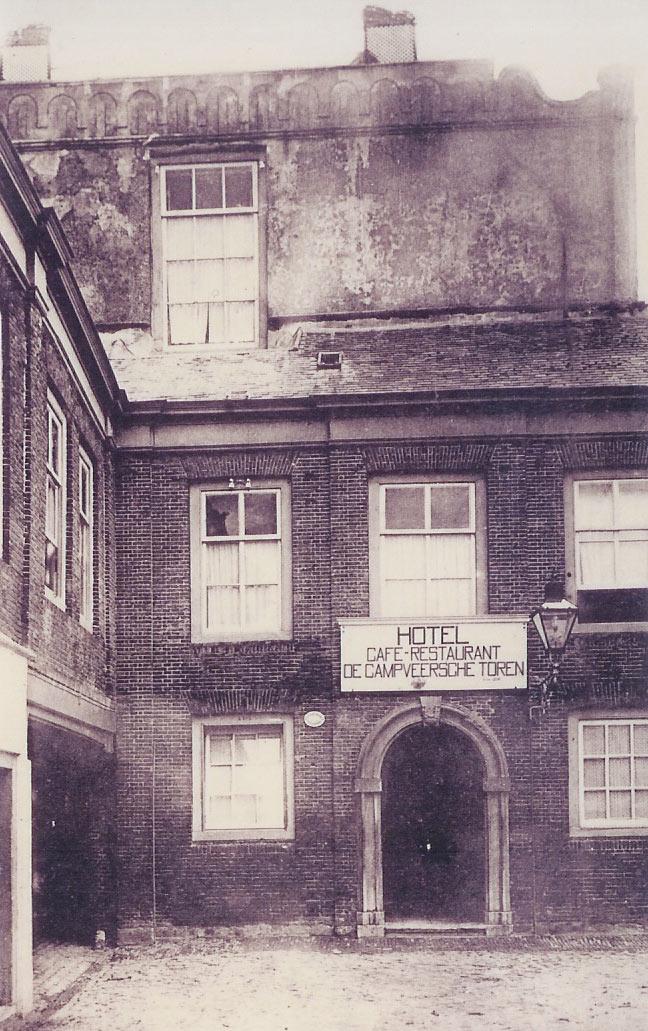 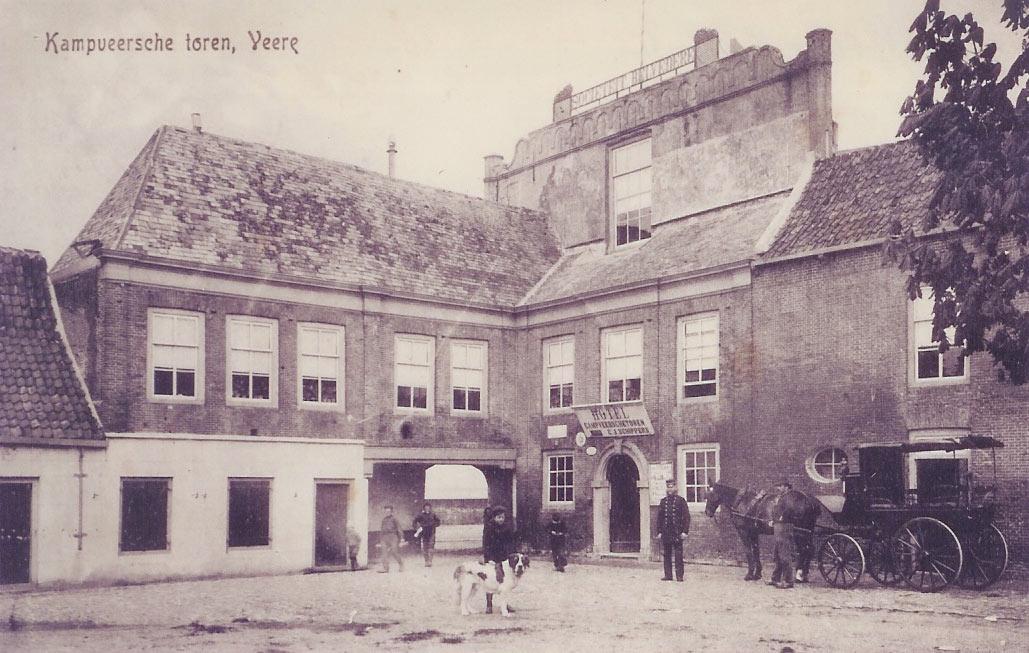 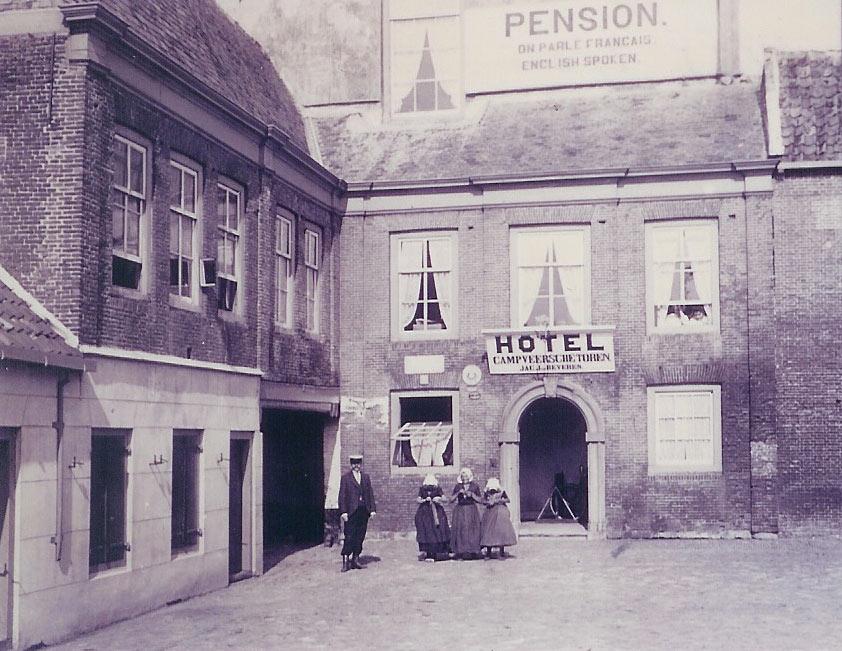 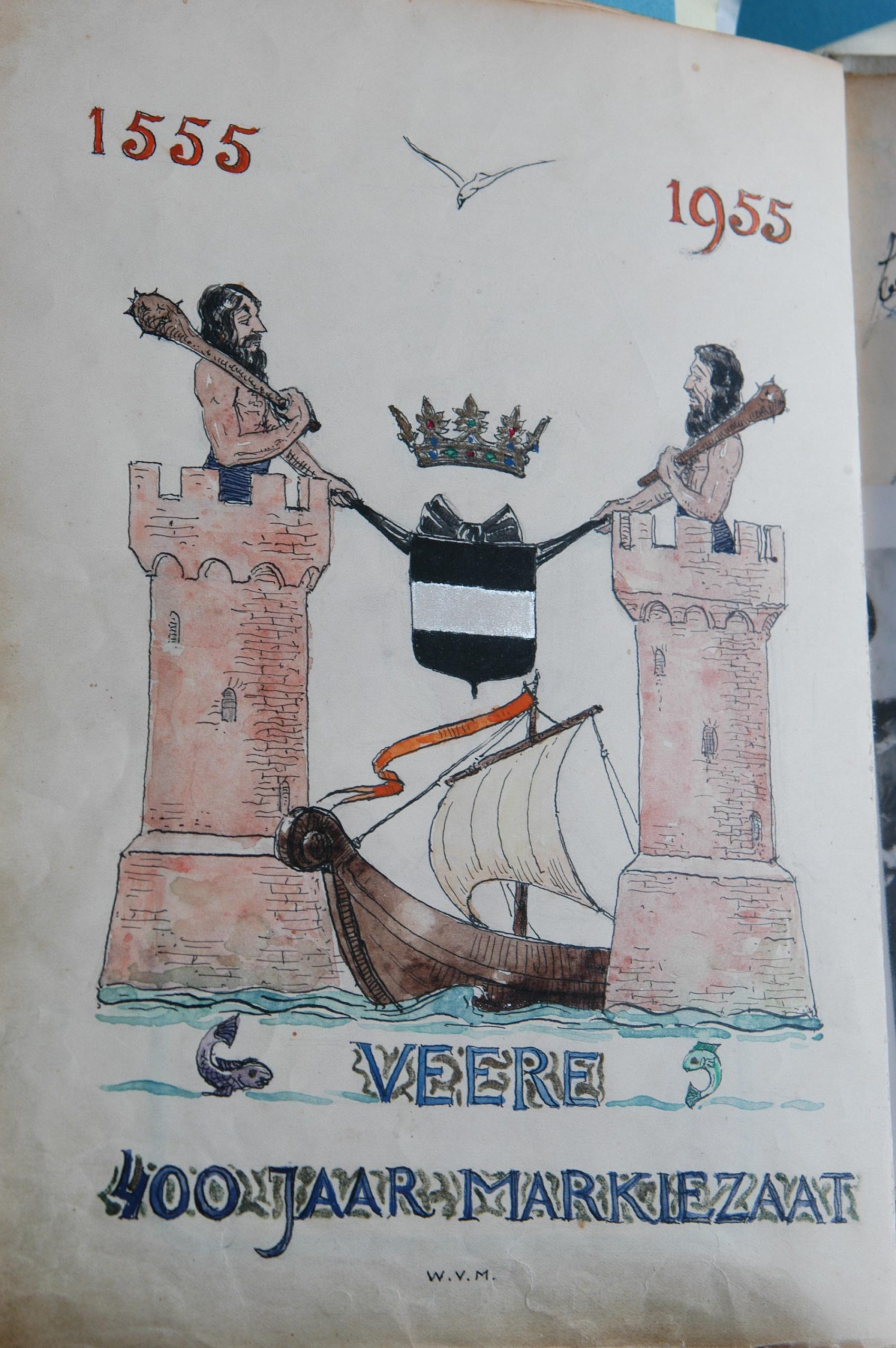 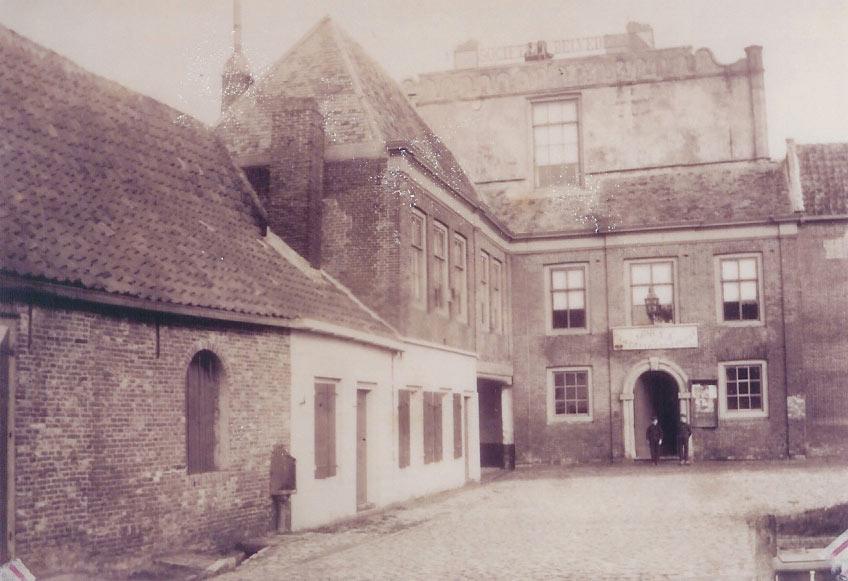 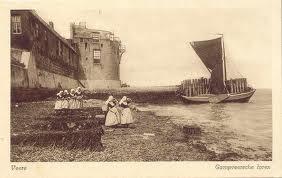 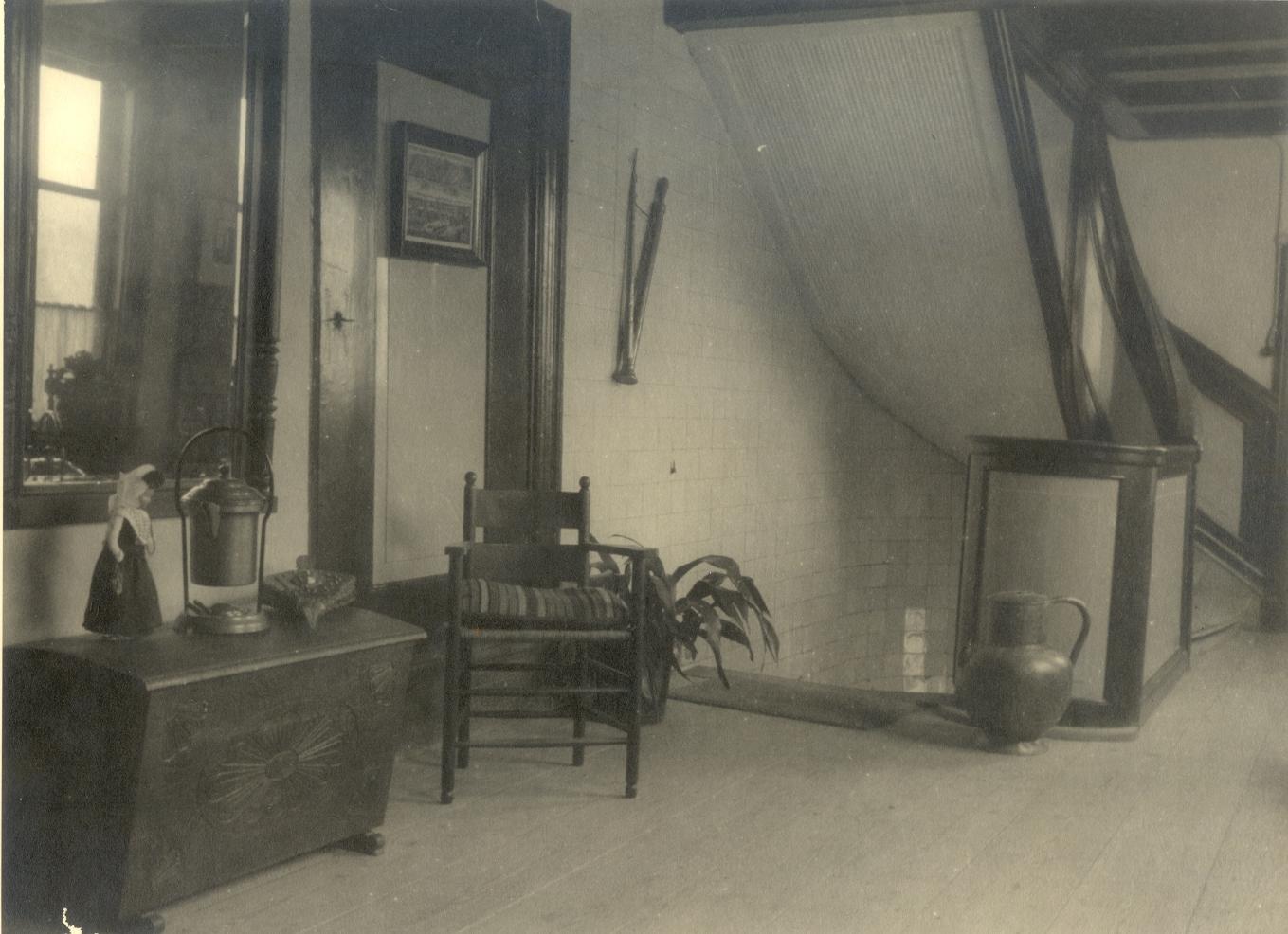 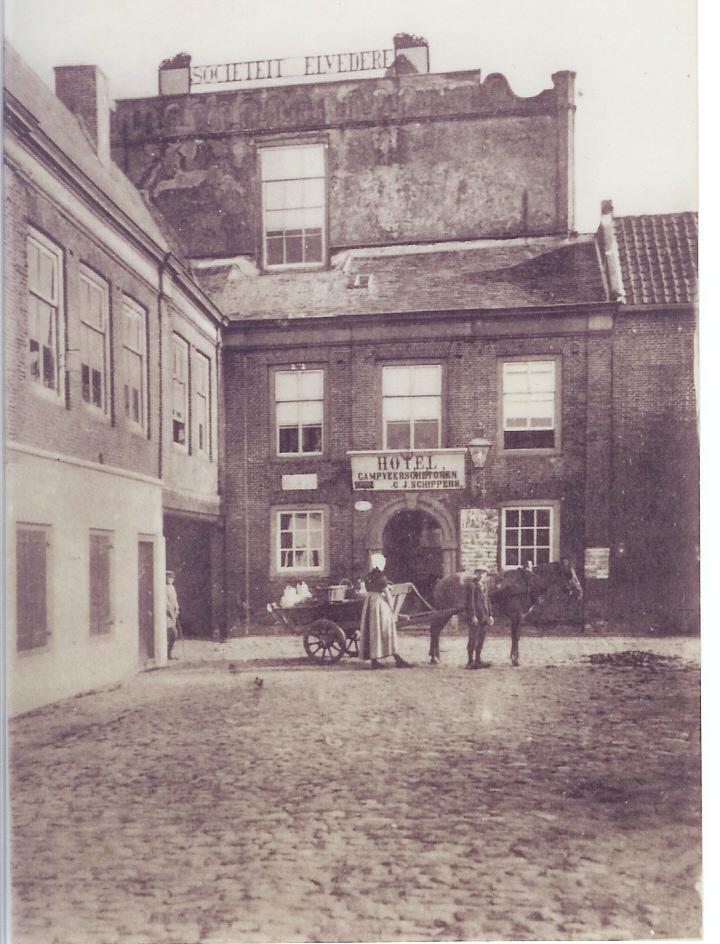 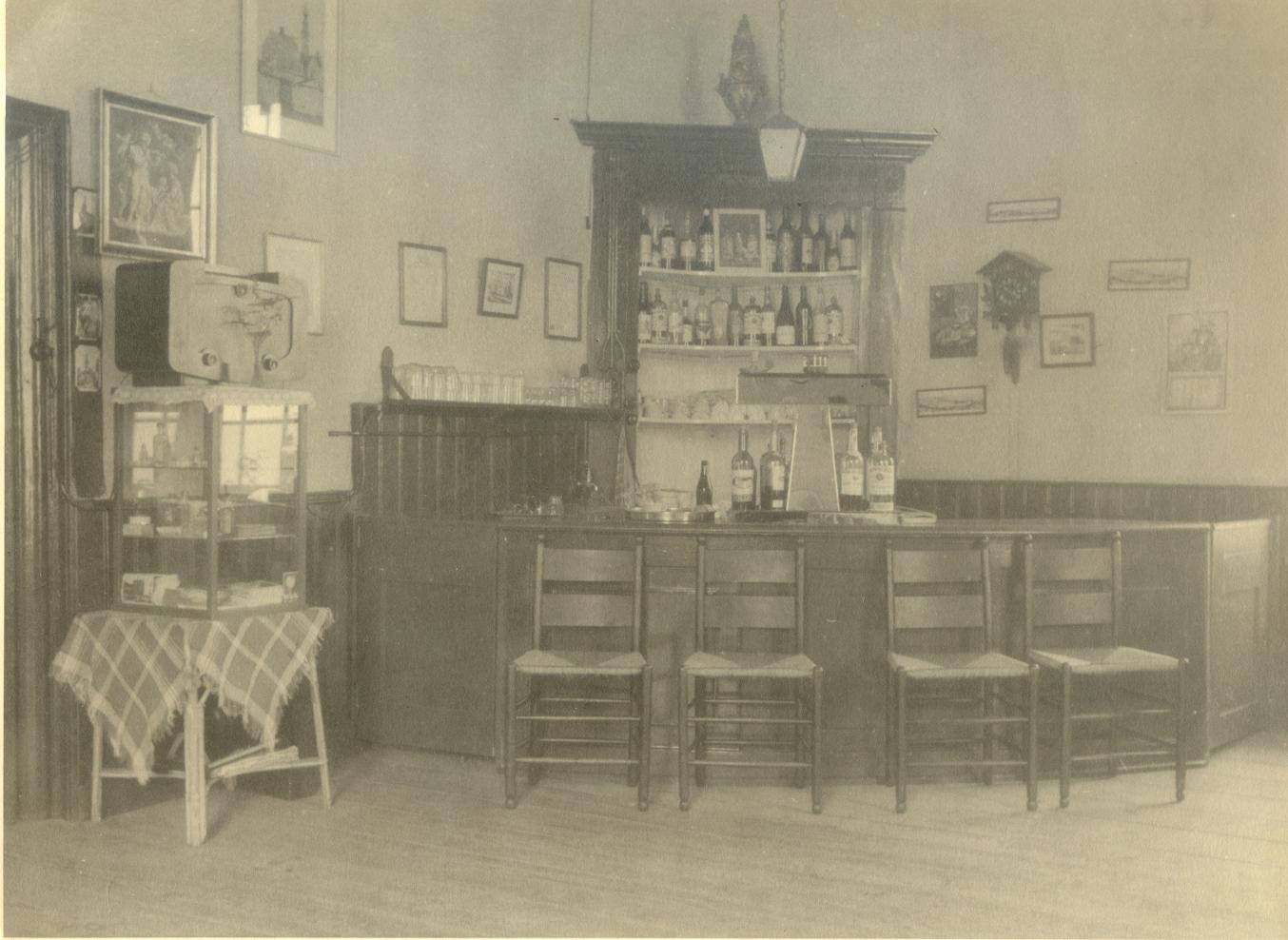 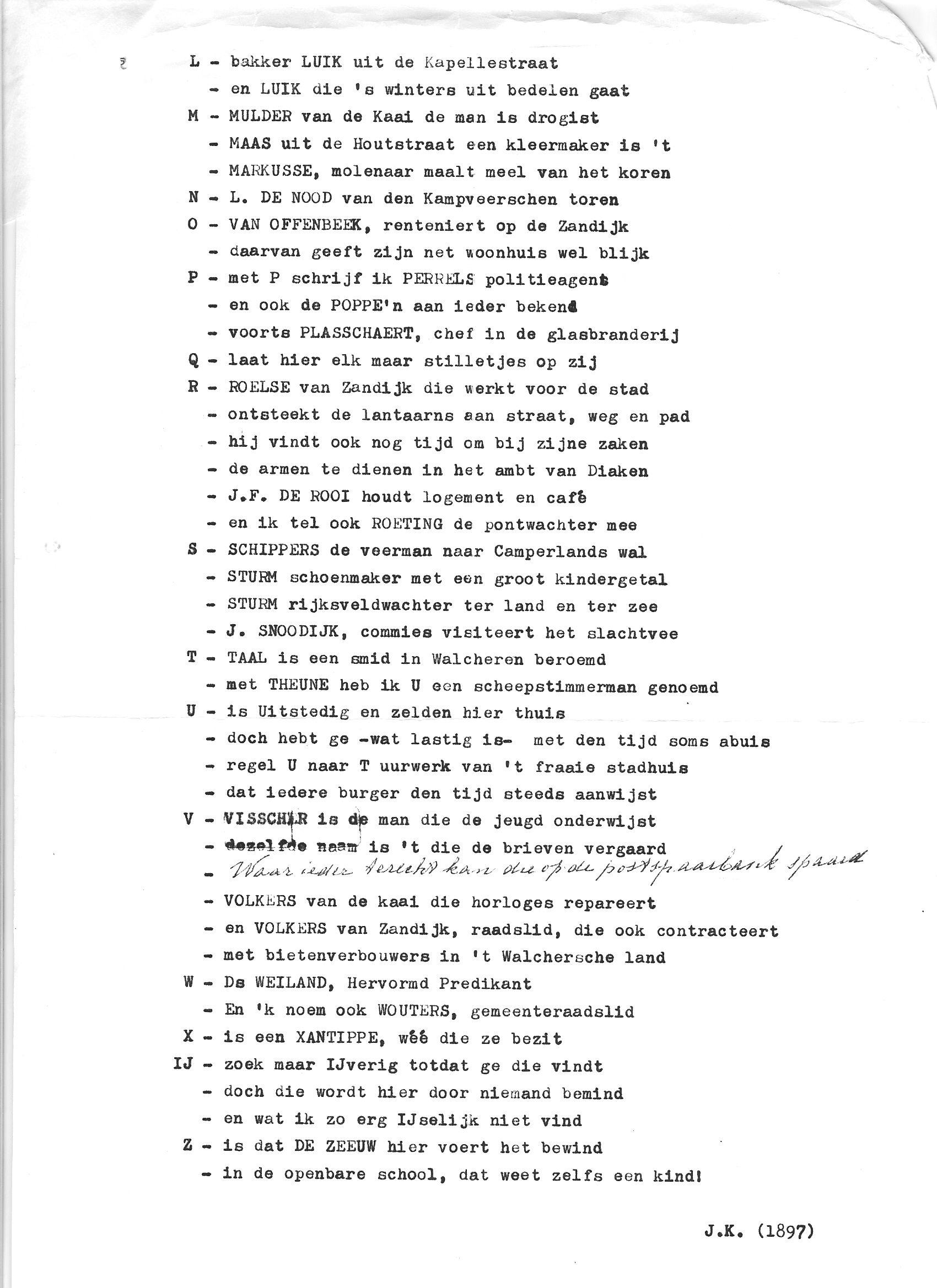